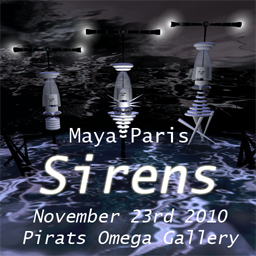 Stand in the ocean and sing with us.

Many thanks to Zil Jewell for new studio space to work on this piece at Santa Barbara City College sim and Merlina and Newbab of Pirats Art network for inviting me to exhibit.
Posted by Maya Paris at Tuesday, November 23, 2010 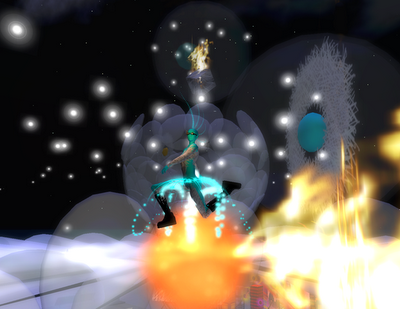 
The Caerleon Museum of Identity is the latest in the series of sim-wide collaborative installations by the Caerleon Artists Coalition, a project of the Virtual Art Initiative .

WITH- DJ Mommaluv Skytower -should be a great party! 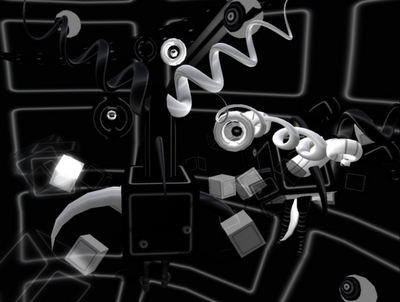 "Now You See Me" , an interactive, musical installation, is my contribution.

Come and click the sign to get your own ID-Bird, find the 12 ID-clues and enjoy the absurdities and ambiguities of your own shifting Identity. You even get socks.

On the island are works by 18 artists from around the world on the theme "Ambiguity of Identity":

There's work inside the building, up in the dome (flying cushions and all) and outside on the water. Loads to explore.

Freewee Ling has done a great job of co-ordinating, building the central museum and all-purpose-artist-wrangling. Many thanks to her and to all the other artists involved, it was a great experience to meet and collaborate with such a diverse, inventive group of people!

Some great posts already about the details of this project, read more here: 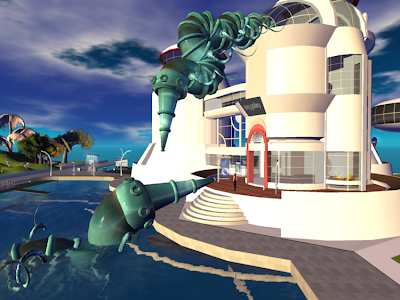 Step right up and see for yourself!  Peer into the amazing TeleOctoscope and instantly glimpse what is thousands of miles away as if it were right there!!

THEN- Wear your suit, hop into the water, flipper down  and find the viewing pods on the seabed.

***TURN ON your streaming media and SIT on one of the viewing pods.
Each pod will show you something different, so try them all. 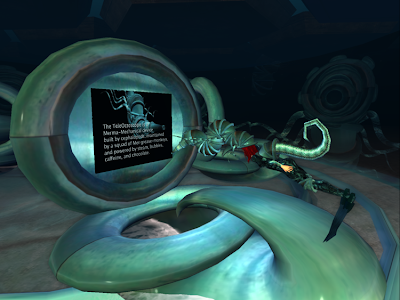 There are also two lookout posts up top. Hover that mouse until you see the chair icon and click! 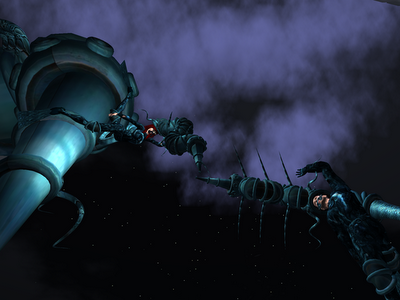 The TeleOctoscope has been built by cephalopods, maintained by a squad of Mer -Mechanics, and is powered by steam, tea, and chocolate. And we need YOU! The pay's terrible but you get to keep the suit.

Inspired by the 19th-century invention of the "telectroscope," our contraption is an example of virtual collaborative technology and enables communication and collaboration on interactive art projects and machinima between Boston (US) and Whitstable (UK).

For information about the original telectroscope, start here:
http://en.wikipedia.org/wiki/Telectroscope  and then you can read Mark Twain's 1904 London Times story featuring it here:  http://tiny.cc/39g20  It is a bit like War of the Worlds in the way that people became confused about whether the machine actually existed or not, but we can assure you that the TeleOctoscope does because you can see it here, and the wonders it can glimpse, for yourself.

Many thanks to Formatting Heliosense for inviting us to bring the TeleOctoscope to the Turing Gallery, to Deebrane String and Galatea Gynoid of Extropia and to Sage Duncan of K.U for all her suport.
Posted by Maya Paris at Friday, August 20, 2010

Drift - filmed by Kekoa Arbizu on a quiet night at sea.

A smaller version of Drift is at the University of Western Australia Art and Design Challenge for a short while.

Click here to Teleport and be sure to pick up and wear your Driftsong from the sign.
Then just look up, lie back, listen and drift.

Lots of fantastic entries this month, give yourself plenty of time to see them all.
Posted by Maya Paris at Tuesday, July 27, 2010 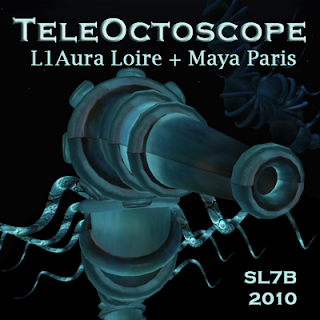 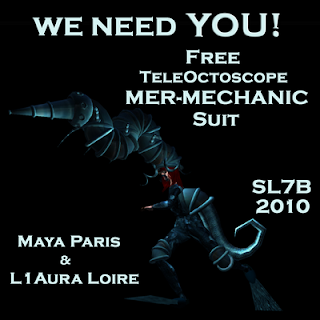 Step right up and see for yourself! Peer into the amazing TeleOctoscope and instantly see what is thousands of miles away as if it were right there!

And we need YOU! Get your very own Mer-Mechanic outfit from the sign and prepare to get greasy.

Built by cephalopods and powered by steam, tea and chocolate, the TeleOctoscope was inspired by the 19th century invention of the "telectroscope" and enables communication and collaboration on interactive art projects and machinima between Boston (US) and Whitstable (UK).

Many thanks to Sage Duncan of KU for all her support
Posted by Maya Paris at Wednesday, June 23, 2010 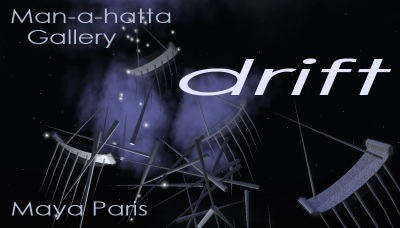 Many thanks to Oberon for hosting this piece at his open-air gallery on the water, Sage Duncan of K.U for time and space to build and Gardenia Mills for her peaceful island.
Posted by Maya Paris at Wednesday, May 19, 2010 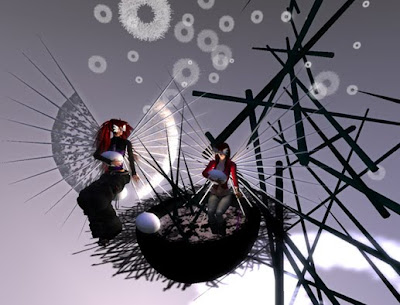 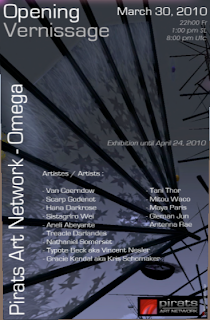 Many thanks to :
Merlina, Newbab and everyone at Pirats,
Nigel Hobbins for his inimitable bird-whistling
(listen to his music here ),
L1Aura Loire and Yohann Emoto for their invaluable help.
Posted by Maya Paris at Tuesday, March 30, 2010

What's an Opening without a Centaur and a Cigar? 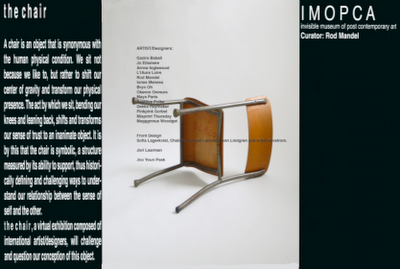 Curated by Rod Mandel of IMPOCA 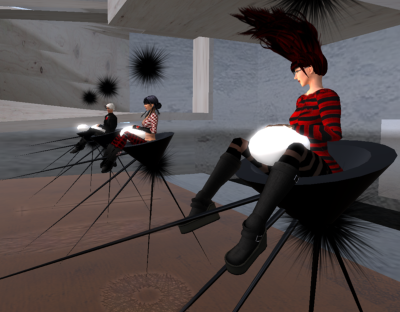 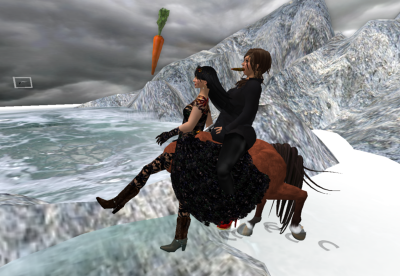 Extraordinary diversity and ingenuity in this show. Explore the whole gallery, there are many levels, various rooms and some surprises (Bryn's takes some finding, so I'll give you a clue....there are holes in the floor)

Many thanks to Rod for organising such a great exhibition.
Posted by Maya Paris at Thursday, March 11, 2010 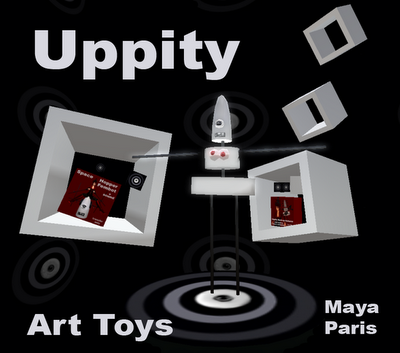 The Fembots are back and they're UPPITY.

Come and Blow your Top with the big Fembot, consult the Uppity Oracle and pick up your free animated Uppity Fempits. 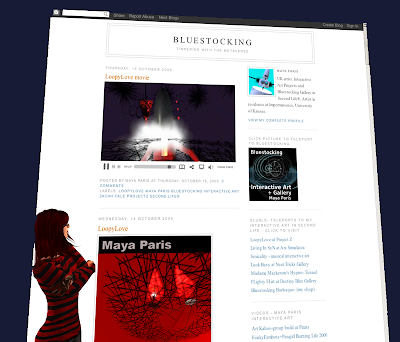 Second life Viewer 2 (beta) is available now. And we have...the blog on a prim! The first trial of this at my gallery went pretty smoothly today thanks to Torley's excellent short tutorial video here .

And the difference between this and parcel media is? It's interactive. Click it, scroll it, watch movies, follow links, get SLURLS, connect to other blogs. Works just like any webpage and yes, you can even watch Youtube movies.

Download from here http://secondlife.com/beta-viewer/ if you fancy a go yourself.

+ Teleport to Bluestocking Gallery to try it inworld.
Posted by Maya Paris at Thursday, February 25, 2010